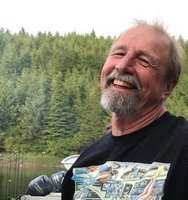 Current California resident, Chris Goodman, died unexpectedly on October 16,2020 in Santa Barbara, California where he lived with his wife, Joanne.

Chris Goodman was born on May 27, 1953 in England to Alan and Joan Goodman. He was raised in Zambia, Africa. He served in the Rhodesian Army. Chris received his degrees in Microbiology and Plant Pathology from the University of Pietermaritzburg, Natal in 1981.

Chris was a plant pathologist for the South African Plant Organization and later had interests in several agricultural concerns in South Africa. He continued his goal of promoting new fruit varieties in South Africa through ZAIGER SA.

Chris enjoyed travel and was an avid outdoorsman.  He was a free diver and enjoyed trips with Joanne and their friends for fishing in Alaska. He started downhill skiing at the age of 56.  Within a few years, he was flying down the slopes with ease, but powder skiing brought him the greatest delight.

Chris loved the African bush and spent many wonderful hours experiencing its magic.

Chris will be greatly missed by all those who had the pleasure to know him and to love him.

In lieu of flowers, memorial donations may be made in Chris's name to: https://www.stjude.org/get-involved/find-an-event/dinners-and-galas/invest-in-hope-la.html