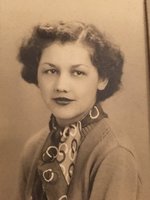 Georgia Margaret Judy Passed away November 18, 2020 with her daughter Kathleen at her side. Born Georgia Margaret Bonn 2/23/1919 in Santa Barbara. A graduate of Santa Barbara High school in 1937.  She met my father Ralph At a USO Dance in Santa Barbara she met her sweetheart and love of her life. My father said there was 2 women he was going to ask to dance but she had better looking legs. She did till the day she died no veins.  They found themselves on 11/7/1942 at the Our lady of sorrows and literally took the vow “till death do us part”. She remained faithfully with him for 60 years till his passing in 2002. Ralph was stationed in WWII at Fort Ord. Georgia was living in Carmel  and working at a Jewelry store After the war they settled in Santa Barbara where they raised 3 children. Georgia worked at the Phone Company then Santa Barbara county hospital where she was a telephone operator and finally retired from Sansum Clinic. She loved Bingo where she played at the Elks club and at Valle Verde.  She did lunch Duty for Many years at San Roque School. She loved her Hershey Bars and Coca-cola. She was the best Mother, Wife, Nannie (grandmother) and Great-grandmother. She was the most loving mother, so supportive and had unconditional love and the best sense of humor. She loved animals particularly cats and dogs. You won her over with a Hershey bar and coke. She was preceded in death by her husband Ralph, sister Frances and son Patrick. She is survived by daughter Kathleen and another daughter. Grandchildren Diane, Justin, Samantha and 5 other grandchildren. A special heartfelt thanks to Valle Verde Health Center. To many to thank and the special love you showed her and great care. A special thank you to Marisela and Michael. Dr. Armet , Dr. Geiler , Fr. Steve Downes. Thank you so Assisted Living and Hospice care Aretha, Brent, Mayra, Nichiren and Kathy. In Lieu of flowers family asks A donation made to Team member Aprreciation fund (TMAF) at Valle Verde. Check payable to Valle Verde foundation, In Memo: TMAF, Mail to Valle Verde Retirement community ATTN: Finance Dept,  900 Calle Del Los Amigos Santa Barbara, CA 93105. A celebration of life will be announced at a later date.