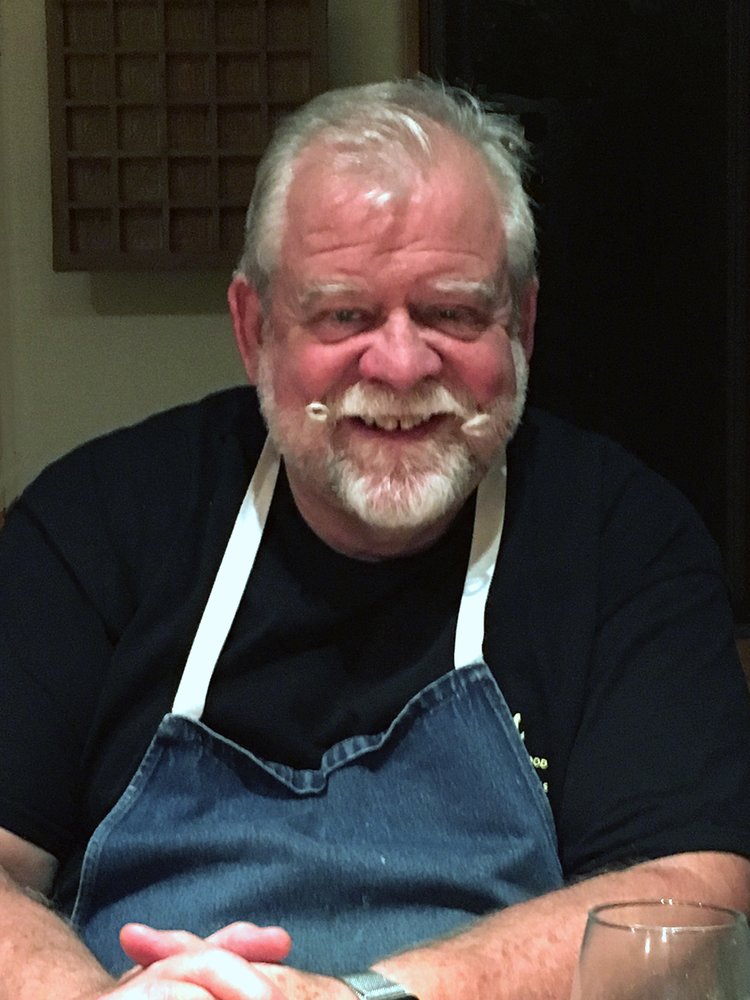 Chef and “Capitán” James Sly passed away at Serenity House on August 23, 2019, following a brief illness, with Annie, his wife of 33 years, by his side. He is also survived by his sister Catherine Aiken, and nieces and nephews Casey, Brian, Adam, Stefanie, and Josh.

Born and raised in Fullerton, California, he held a B.A. in Linguistics from California State University Fullerton. He first cooked at Boy Scout campouts (and was proud of baking pineapple upside-down cake on a campfire) and obtained the rank of Eagle Scout.

He worked at restaurant chains, then began an apprenticeship at Chez Cary, an “old school” haute cuisine restaurant in Orange County, where he met fellow apprentice Michael Hutchings. The chefs have remained colleagues and friends for more than 45 years.

James began his formal training at the Hotel Ritz in Paris, Hotel de Paris in Monte Carlo, and with Michel Guerard at Regine’s in both Paris and New York. He refined his craft at the Summer House in Nantucket; at 1789 Restaurant and the Watergate Hotel in Washington, DC; and at the Desert Princess Hotel and Grand Champions Resort, both in Palm Springs. James also spent several years in private homes, cooking for, among others, Princess Sham Pahlavi, the sister of the Shah of Iran.

In 1984, Michael asked James to cook at an American Institute of Wine & Food Festival at the Music Academy of the West, where James met Annie. The pair married City Hall in Arlington, Virginia, on December 30, 1985, the afternoon before 1789 Restaurant’s gala reopening.

The Slys returned to Santa Barbara in 1989 when James became chef at the El Encanto Hotel, and the two moved to Carpinteria. He became the founding chef and general manager of Lucky’s in Montecito in 1999.

On 8/8/08, Annie and James opened Sly’s in Carpinteria, which offered fine dining with a traditional approach. The walls were hung with vintage road racing photographs by Jesse Alexander who, with wife Nancy, were also dear friends. After a successful ten-year run, they closed Sly’s last year.

James loved to travel and was fluent in French and Spanish, and conversant in Italian and German. He had a lifelong love affair with Volkswagen cars, and wrote for “VW & Porsche” and “European Car” from the 1970s until shortly before his death. Passionate about Apple computers, he helped many a friend navigate their complexities.

His generosity, wit, and humility are legendary, as were his silver handlebar moustache and beard, and warm, welcoming smile. James put other people first, helping his staff, friends, and causes he believed in. He donated his services to many local charities, and received by a “Giraffe Award” from Planned Parenthood for “sticking his neck out.”

James and Annie were best friends, and he wanted her to be part of whatever he was doing. Though many spouses cannot work together, they did at Sly’s, happily. They could be sighted on bike rides in Carpinteria, wearing headsets so they could talk with each other.

At the bottom of every menu, he credited “James Sly & Brigade.” He believed in sharing the credit as much as he loved to share his knowledge and expertise with his staff, many of whom stayed with him for years. They called him “Capitán,” an honor higher than “Chef,” as James Sly taught them not only how to cook, but how to live.

Share Your Memory of
James
Upload Your Memory View All Memories
Be the first to upload a memory!
Share A Memory
Send Flowers