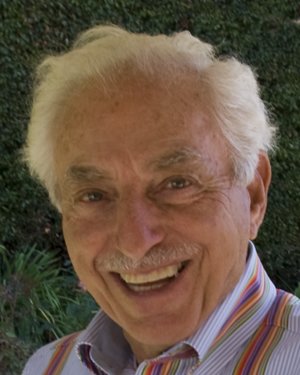 Len grew up in West Hartford, Connecticut. The son of Moses Berman and Bernice Karelis Berman, he developed a lifelong love of music inspired by his piano-playing mother and his sixth-grade teacher, who played classical music for her students each afternoon. Starting at age 9, he studied the saxophone, then the clarinet, and later wrote songs.

In high school, Len was a star baseball player and would remain athletic his whole life. He played senior softball into his 70s, during which time he produced the short documentary “Spirit of Senior Softball.”

While attending the University of Connecticut, Len was drafted into the navy during WWII and stationed on the aircraft carrier USS Wasp in the Pacific. He played sax in the military band and loaded anti-aircraft guns during attacks. Len was proud that his ship shot down the last kamikaze of the war. He and the rest of the crew received a Bronze Battle Star for their efforts that day. While sailing home from the war two weeks later, a powerful typhoon severely damaged the bow of the Wasp. Len often said that the typhoon was among the most harrowing events of his life.

After returning to West Hartford, Len became a Realtor, a home builder and eventually an apartment developer. He married, had two daughters, was active in state politics and served on a governor-appointed tax review board. At age 42 and semi-retired, Len and his family moved to Pacific Palisades, California, where he co-founded a Dixieland band in Brentwood and followed a dream to study filmmaking. Imaginative, determined and confident, Len would go on to produce and direct award-winning documentaries, children’s films and political commercials. He produced the original, live-action film version of “The Velveteen Rabbit,” as well as “Peege,” a short film about an elderly woman in a nursing home, which in 2007 was named to the National Film Registry by the Library of Congress.

In 1989, he moved to Santa Barbara and soon formed a band, Jazz Plus. The beloved Santa Barbara fixture played Dixieland, blues and swing at public events and private parties throughout the area. Len took special pleasure in performing with his band buddies at local retirement communities and senior centers. When he wasn’t uplifting people through music, he enjoyed traveling, golfing, movies, reading, watching baseball games and playing chess. He also spoke to high school students about growing up during the Depression and his memories of the war.

Charismatic and fun, Len brought enormous joy to many people through his music and films. He exuded a zest for life and was always open to trying new things and meeting new people. He is remembered with love and appreciation by his brother, Daniel Berman; two daughters, Jody Berman (Doak Heyser) and Gail Hart, and their mother, Doris Wechter; grandson, Justin Hart; and devoted friend Christine Ryerson.

To send flowers to the family of Leonard Berman, please visit Tribute Store

Share Your Memory of
Leonard
Upload Your Memory View All Memories
Be the first to upload a memory!
Share A Memory
Send Flowers