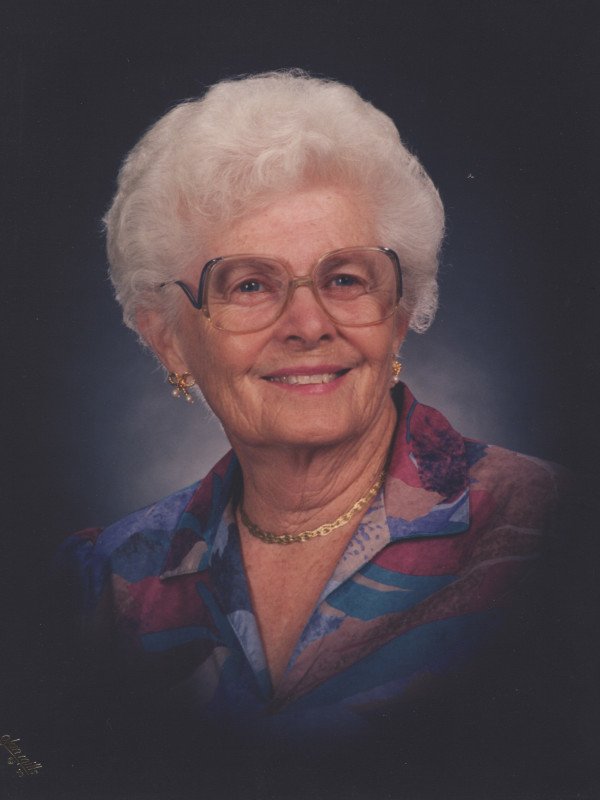 Jean Ellen Flynn Franklin Pfeil was born Dec 30, 1920, to James and Georgie Flynn in the little goldmining town of Georgetown, Ca. On October 6, 2019, Jean went to her eternal home to be with Jesus, her Lord and Savior.

Jean was born into the Flynn clan of goldminers on her father’s side and the German family of innkeepers on her mother’s side. Her early years were spent roaming the golden hills around Georgetown with her siblings: James, Don, Margaret, Jack, and Patricia. Because roads were dangerous and services few, Jean moved to Auburn with her family to attend and graduate from Auburn High School in 1938.
After high school, Jean moved to Oakland to attend business college and work as a secretary in San Francisco. During this World War II era, dances were held at the San Francisco Presidio. This is where she met her first love, Captain Charles (Charlie) Cleveland Franklin, whom she married in 1945. She continued to work supporting the family while Charlie attended dental school at UCSF. Charlie’s hometown of Santa Barbara became their home to raise daughters Janet, Coleen, and Tracy. Tragically, Charlie died in 1957 causing Jean to return to work.

In 1958, Jean became the school secretary of Roosevelt Elementary School, a position she loved and a position she held until 1979. During that time, she married Ray Wolfe and affectionately embraced his five children, Marian, Patricia, Rodney, Ralph, and Rick. Years later, Jean married Arthur (Art) Pfeil, a Santa Barbara High School math teacher in 1975, who became the perfect grandparent partner. After Jean’s retirement in 1979, the Pfeil’s life together was filled with travel, weekly family dinners, overnights with grandchildren, daily walks at the beach, and so much more. Their grandchildren were rich in love and adventure because of Grandma and Grandpa. In 2011, Art went to be with the Lord. Throughout her life, Jean was fun-loving, hard-working, faith-filled, generous in spirit, kind, no-nonsense, organized, persistent, constant.

The family would like to thank the loving staff of Villa Riviera where Jean spent the last 7 years of her life, and the gentle, supportive care of VNA Health. Donations may be made in her honor to Network Medical.

Please join Jean’s family to celebrate this remarkable woman, one of God’s finest creations, at the Free Methodist Church on Sunday, November 10 at 4pm.

To plant a tree in memory of Jean Pfeil, please visit Tribute Store

Share Your Memory of
Jean
Upload Your Memory View All Memories
Be the first to upload a memory!
Share A Memory
Plant a Tree