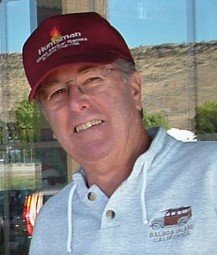 Obituary of Arnold B. Thompson

The life and legacy of Arnold Byron Thompson, began in Oakland, CA on May 27, 1938, as the first and only child of Dorothy May “Geri” Thompson and Charles Leroy “Tommy” Thompson, entered this world. His father was a hard-working man of modest means and his mom’s first priority was always her son as she stayed at home to nurture and raise him.

Arnold often recalled memories of those early childhood days, when he would visit his Grandfathers cabin in Redwood Canyon, which likely lead to his desire to live in the country as he aged into retirement.

In search of new opportunities, Tommy brought the family to Santa Barbara when Arnold was a young boy. Here his Dad, who held many traits as an Inventor, Mechanic, Midget Racecar Driver and even a Sports Announcer on the radio, found the desire to open up his own business on State and Haley, called Industrial Products, where he sold machining and Mechanical tools and parts.

These ingenuitive traits were certainly passed down from Tommy to Arnold and later to Arnold’s son Steve, as well. These boys were always figuring out new ways to do things, stayed active in building, and for Arnold, his father’s love of cars was one of his own passions, especially in his retirement years.

Arnold had a collection of classic automobiles that were meticulously maintained and that showed through his display of countless trophies and awards for his cars. With his most favorite being his ’32 ford coupe and his “Thompson Original”, a 1927 Ford Open Bucket Pickup, called the Tangerine Tango. In which he built entirely from the ground up. These toys allowed him to stay active and he would often be found hanging out with the local car club or touring around Utah and Oregon, showing off his efforts at car shows.

After arriving in Santa Barbara as a young boy, Arnold attended Our Lady of Guadalupe Elementary School, where he developed several life long friendships. Then, as he moved to Santa Barbara Catholic High, he continued to find people in his life, that he would do anything for and he always held such great remembrances of his teenage years.

Arnold stayed busy back then, helping his father at the family business, at State and Haley and then as an attendant at the Union 76 Station, across the street from the Fox Arlington. Cars were his thing even back then, and we were always told of the good ol’ days when the “Gang” would hang out at the Blue Onion on State and Valerio or simply cruise downtown with his buddies.

It was this time at Catholic High, that Arnold met Terry Thompson. Yes, she had the same last name, so that made it easy when they were later married in 1960 at the Old Mission.

Their first child, Lisa was born in 1961 and their son Steve followed in 1962. And from there, his legacy grew as Lisa brought along 5 grandchildren into the family with 5 great-grandchildren following down the line.

After High School and as Arnold and his young bride began to build their life together, Arnold found a drive to learn to be an Electrician, and worked through his early apprenticeship at Vandenberg, AFB, where the early Atlas rockets were being readied and launched. This moved him into an opportunity to join Security Alarm Service, S*A*S, as one of their first employees. He excelled in the alarm business and spent several decades with the company, even after it was sold to Bay Alarm in the late 70’s. This type of home town business, made it nearly impossible for the family to walk around town, without someone knowing Arnold. And it gave him access into some of the most amazing homes and top-secret businesses throughout the county.

As his alarm career came to an end in Santa Barbara, Arnold moved to Oak Shores, at Lake Nacimiento, where he and Terry, along with the help of countless friends, had been building their retirement home for several years prior. Here Arnold met the owner of another local alarm company and he stepped right back into the business and helped build Great Western Alarm, before finally stepping away, to become a Real Estate agent.

Arnold and his second wife Jeanne, bought Oak Shores Realty, just before the real estate boom, which offered them an opportunity to find success and find hundreds of new friends, as they helped families find new homes in this private lakeside community.

From Oak Shores, the Thompson’s moved out to St. George, Utah for a number of years, before finally settling in Grants Pass, Oregon. Ironically, Arnold was in the process of moving back to Santa Barbara to be closer to Steve and Kim, when his life came to an end. He had hoped to reconnect with many of his friends in Santa Barbara and reclaim some of those old memories once again.

On Friday, January 24, 2020, Arnold passed into his eternal life, at the Oregon Health and Science University Hospital in Portland, with his son and daughter-in-law at his side. We cannot thank the Doctors, Nurses and Staff of OHSU, as well as the numerous ground and air-flight paramedics and the emergency staff at Three Rivers Medical Center in Grants Pass, OR, for their wholehearted caring and compassion.

Arnold was preceded in death by his Mother and Father and grandson Stevie Pahler. Leaving behind his wife Jeanne of Grants Pass, Oregon; along with his Son Stephen Michael Thompson and his wife Kimberly, of Santa Barbara, CA; Daughter, Lisa Christine Pahler and her husband Steve of Atascadero, CA; Grandsons, Jason Pahler, Brandon Pahler and Johnathon Pahler and his Granddaughter Corrine Pahler; and his first love Terry Thompson.

An afternoon of remembrance and prayer will be held at the McDermott-Crocket Mortuary Chapel at 2020 Chapala Street, Santa Barbara, CA on Friday, January 31, 2020 at 4:00 PM, with viewing available starting at 3:30 PM.

Final Graveside services will be held at 10:30 AM on Saturday, February 1, 2020 at Calvary Cemetery. Fr. John Love, officiating. All are welcome.

Donations may be made payable to: The Oak Cottage of Santa Barbara, c/o Steve Thompson, 3463 State Street, Suite 523, Santa Barbara, CA  93105. Donations will be used in support of family members dealing with Spouses and Parents afflicted with Alzheimer’s.

Share Your Memory of
Arnold
Upload Your Memory View All Memories
Be the first to upload a memory!
Share A Memory
Send Flowers