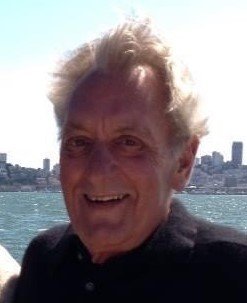 Douglas Bolling Lambert passed away peacefully the evening of April 17, 2020, surrounded by loving family and friends.  He fought a good fight against a difficult illness.  He was 73.

Douglas was born in Dayton, Ohio on Sept. 28, 1946 to Marjorie Sherriff and Edward Lambert.  He is predeceased by his sister Laura Lambert.  He was an all-star athlete in high school, competing in swimming, football and golf.  He was proud to be a Marine.

Forever the innovative and creative spirit, Douglas reinvented himself through many occupations including the ministry, laying asphalt, selling pies in Florida, and selling insurance to the tobacco industry in the Southeast.  Douglas arrived in his dream town of Santa Barbara with nothing but his Gremlin and backpack for his days ahead at Brooks Institute in 1983.  Following the birth of his daughter Lauren, the love of his life, he returned to the insurance industry in 1987.  He single-handedly carved out a niche market selling maritime insurance locally, then nationally for passenger boats.

Douglas loved his family, business, boats and the people who operated them.  He was known for his charm, quick wit, knack for storytelling and ability to make others laugh over more than one martini.  He was a kind man with a compassionate spirit.

Douglas was well known for saying, “drive fast and stay to the left.”  And that is just what he did.  He will be sorely missed and will live on in our hearts forever.

To send flowers to the family or plant a tree in memory of Douglas Lambert, please visit Tribute Store

Share Your Memory of
Douglas
Upload Your Memory View All Memories
Be the first to upload a memory!
Share A Memory
Send Flowers