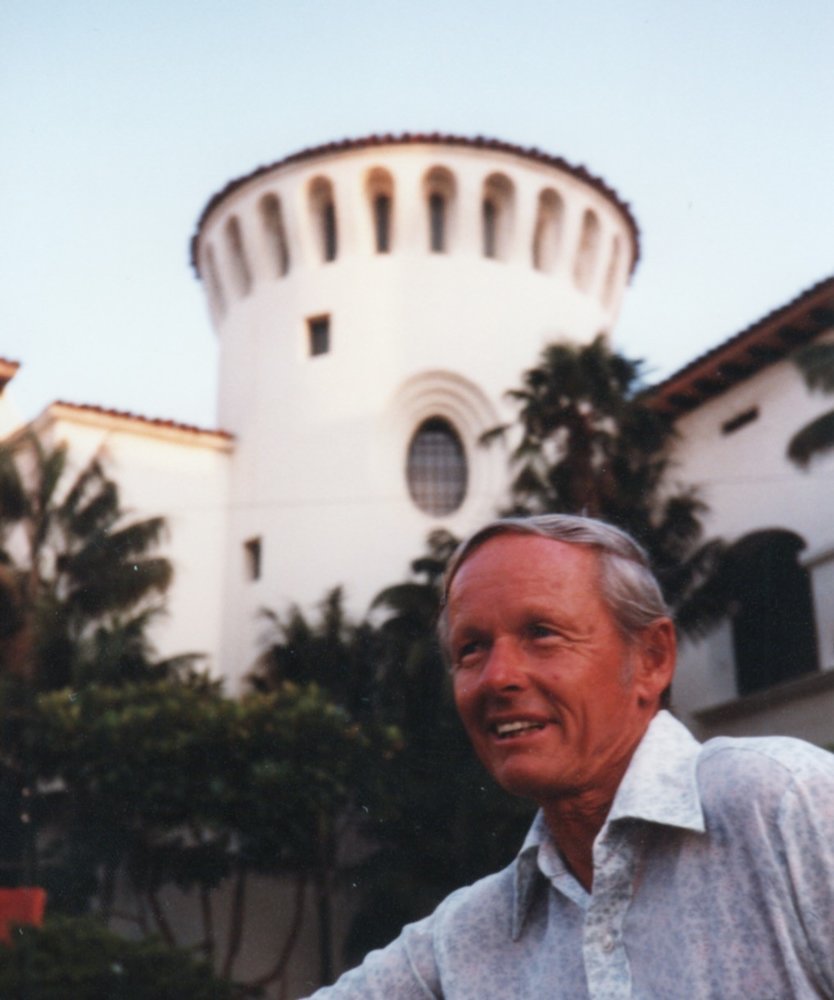 It was all about Santa Barbara and Golf; and family, friends, doing the right thing, duty & honor, and the USA. Donald Lynn Warner Jr. 1923-2021 a true (Southern) California native, was born in San Francisco to Don Warner Sr. and Katherine Guthrie Warner where they lived in the St.Francis Hotel as his father Don Warner Sr. played in the hotel band and finished law school. Brother Jack came a year later, then back home to 1920s - 30s Southern California. Family lines had long been established in the Golden State before the onset of the 20th Century; with British Isles and German ancestry contributing to the establishment, preservation, and defense of the USA.

The 1930s Depression was formative, with difficult years while growing up in the Los Angeles Silver Lake District. Then came equally formative WWII, with US Navy service out in the Pacific with the illustrious TBM Avenger Torpedo-Bomber Squadron VT 10 flying off the USS Enterprise (CV-6) Aircraft Carrier. Among the numerous 1943-44 actions, Don was  proud to be part of the first night carrier air operation in the early February 1944 attack on Truk; with equal pride as VT10 (“The Buzzard Brigade”) and he with the other Navy airmen were awarded the Distinguished Flying Cross and Air Commendation Medals.

Married in August 1944 to Barbara Karr, John Marshall High School sweetheart, happy post WWII times followed as they built their lives in the Los Angeles area with college, a career oriented to finance, and children - Scott Austin 1948 and Steven Allen 1950. A great adventure was to San Antonio Texas 1953-56 for a comptroller post with a military hat company. Best of all was enjoyment of signature Texas hospitality: with a special and enduring friendship with George and Mary Fleet.

Coming to the Santa Barbara area in 1956 a rural and idyllic life ensued: residing on Storke Ranch west of Goleta and going to work in his beloved powder blue Austin-Healy ‘59 bug-eye Sprite to downtown Santa Barbara. Weekend family adventures in the Sprite up and down the coast and mountains were special. A bit later came the Golf and a wonderful home owned in town.

As an exemplary role model, being a good husband and a good father were foremost, ever involved (with expert advice when asked) with sons as they grew up and throughout their later years to the very end of Don’s earthly existence. Sadly third son Thomas died in infancy in the early 1960s.

Santa Barbara work was significant: first in finance matters for a military clothing and ladies fashion enterprise; then Southern California Edison Company in customer service, finance, and operations as a supervisor for decades until retirement in the mid 1980s. Fellow Edison senior supervisor Bob Chilcott was a special work and golf friend.

Retirement was filled with travel and Golf: with Don shooting his age (and numerous holes-in-one) until 95 (golfing twice a week!) with so many dear golf buddies with the Elks and other groups. Widowed in 2013; Don pressed on with the motto “Keep Moving” until advancing age finally caught up at 97 years-7 months-4 days on June 19, 2021 at his home in idyllic Santa Barbara, with progeny on continued watch at his bedside.

Much appreciation to relatives and friends departed and living; and to the Santa Barbara area medical community looking after Donald Lynn Warner Jr. the last three years.

An August 22, 2021 late afternoon Memorial well be held at the beloved Santa Barbara Golf Club for family and friends.

To send flowers to the family or plant a tree in memory of Donald Warner, Jr. , please visit Tribute Store
Sunday
22
August

Share Your Memory of
Donald
Upload Your Memory View All Memories
Be the first to upload a memory!
Share A Memory
Send Flowers
Plant a Tree