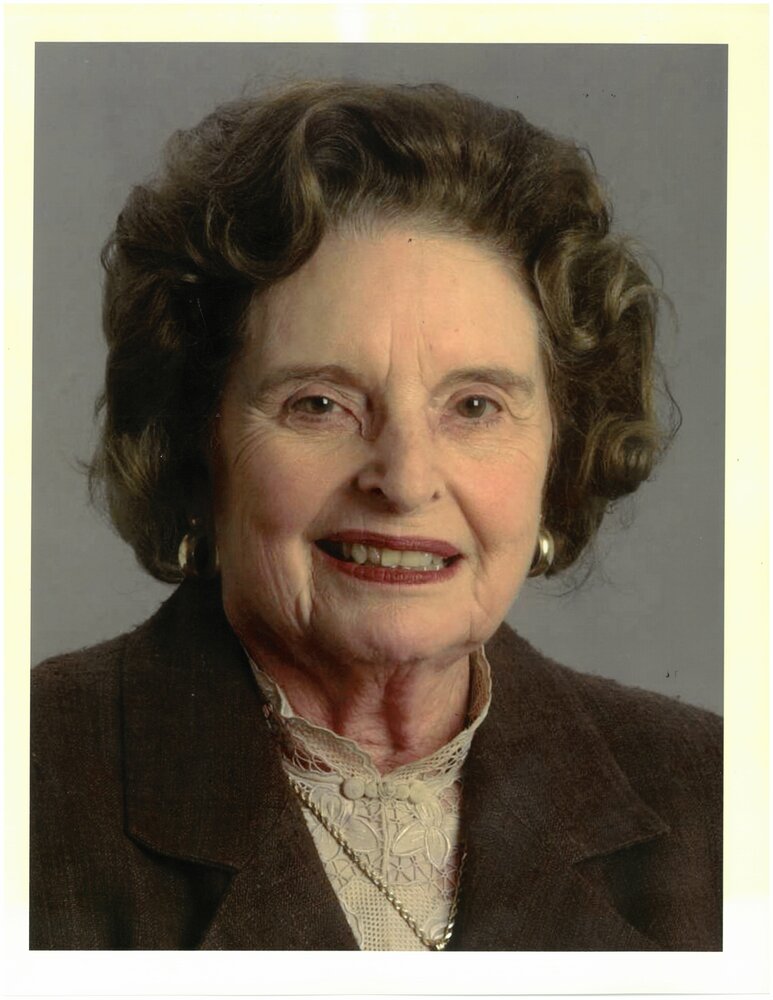 Van Gelderen, Josephine (a.k.a. Jo Beth) was born in Bowie, Texas on October 21, 1917, to William Fay Kingsbury and Augusta Eugenia Kingsbury. On December 30, 2021, she passed away peacefully in her home in Santa Barbara to join the angels. She will be missed by the many who loved her.

Jo Beth graduated from UCLA with a Ph.D. in History. In 1951 she moved from Beverly Hills to Santa Barbara as the bride of a young college professor, Wilbur Jacobs. Together they raised two daughters, Elizabeth (Betsy) Hayden, and Catherine (Cathy) Homer. After 25 years as a faculty wife at UCSB and a teacher at Santa Barbara City College, she met Don Van Gelderen. Jo Beth and Don were both on a tour of South America and newly single when they met. Egypt and Greece were followed by visits to more than 90 countries, including three trips to the Antarctic and a memorable voyage through the Northwest Passage in 1985. Hot air ballooning in France, Italy, and Switzerland were favored vacations as were numerous cruises. She preferred sightseeing by hot air balloon, helicopter or at the controls of a small airplane (she earned her pilot’s license in 1960). Jo Beth’s thirst for adventure and love of travel has inspired so many who loved her.

Always very generous to several charities and non-profits in our community, Jo Beth volunteered her time on several non-profit boards and committees over the years. She was a strong supporter of UCSB, where the History Graduates Reading Room is named in her honor. She set up two endowments to financially support future graduate students. She was a strong supporter of the Santa Barbara Symphony, S.B. Chamber Orchestra, S.B. Museum of Art, Music Academy of the West, S.B. County Food Bank, Santa Barbara Foundation, Environmental Defense Fund and several other environmental groups, S.B. Rescue Mission, and the S.B. Natural History Museum. In addition to all this good work, she supported education and provided the resources for several young men and women to pursue higher education.

An “adopted” son Rob Kooyman along with his wife Cathy and their four daughters, Melanie (Daniel), Megan, Emily, and Kaylee have shared life with “Oma” for more than 33 years including many vacations together. Dr. William Gallivan, his wife Karen, and their children, Will, Robbie, Stephen, Katie, Andrew, and Brandon, were “adopted” grandchildren and very special to “Oma”. She loved spending time with these two young families over the years because she always enjoyed the excitement and action that comes with a house full of teenagers.

Carlos Granados was an amazing caregiver, companion, and friend for more than 25 years. Carlos cared for Don before he passed away in 2004, and he also took great care of her dogs, Joe Boxer, Lilly and Bodie. Jo Beth and her entire family were so very grateful for his wonderful care, love, and support over the many years together.

A memorial service and burial will be held on Thursday, January 13th at 10:00 a.m. at Santa Barbara Cemetery. Memorial contributions may be made to the Santa Barbara Symphony in her honor.

To send flowers to the family or plant a tree in memory of Josephine Van Gelderen , please visit Tribute Store
Thursday
13
January

Share Your Memory of
Josephine
Upload Your Memory View All Memories
Be the first to upload a memory!
Share A Memory
Send Flowers
Plant a Tree