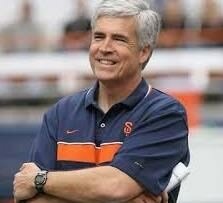 October 9, 1951 - January 5, 2022 Gregory McIntosh Robinson (Greg) was born on October 9, 1951, in Los Angeles, California. He was the 5th of Rita and Mark Robinson's 8 children. At any early age, Mark instilled in Greg and his siblings a devotion to the game of football, which was only superseded by their devotion to the Catholic faith (naturally, they were lifelong Notre Dame fans). Greg grew up in LA's Hancock Park neighborhood and attended Saint Brendan's grammar school, where, despite their best efforts, the nuns were unable to break his rebellious spirit. Later, the family briefly moved to Bakersfield, where Greg attended Garces High School. When the rest of the family returned to Los Angeles, Greg stayed to attend Bakersfield Junior College and became a football standout. From there, he earned a scholarship to play football at the University of the Pacific, where he was voted the team's "most inspirational" player. As his college years ended, Greg made the two most important decisions of his life: to pursue a career in coaching – and propose to his girlfriend, Laura Breakey.

As a coach, Greg worked at his Alma Mater, Pacific, and then Cal State Fullerton, NC State, and UCLA, before moving to the NFL and coaching for the New York Jets, Denver Broncos, and Kansas City Chiefs. After a brief but rewarding stint at the University of Texas, Greg realized his lifelong dream of becoming a college head coach when he was hired at Syracuse University. Greg's time at Syracuse didn't go as planned, but in their four years there, Greg and his staff recruited a talented and passionate group of players, who went on to lead the team to success. After Syracuse, Greg coached at Michigan, Texas, and San Jose State. By the time he retired, Greg coached in 10 college bowl games and 10 NFL playoff games. He might be best known for his time as the defensive coordinator for the Denver Broncos during their back-to-back Super Bowl wins. Greg was a teacher, motivator, and a creative defensive mind. More importantly, however, Greg touched the lives of innumerable players and colleagues. Greg was committed to helping others reach their athletic and personal potential.

For all of Greg's career success, his family was his greatest passion and source of pride. He and Laura were truly a team - and approached their life as a daring adventure. They lived in a dozen locales over the course of their marriage, and they navigated the ups and downs of football and life with grace, resiliency, and teamwork. Greg and Laura had three children, whom they loved with all their hearts. Despite his demanding profession and busy schedule, Greg was always a present husband and father, who went out of his way to stay engaged in his kids' lives. He instilled in his family a deep faith in God, a strong work ethic, a loyalty to friends and family, and a commitment to justice and fairness. In more recent years, Greg and Laura settled in Carpinteria, California, where they delighted in being grandparents. For his six grandkids, "Coach" was a central figure – larger than life, full of love, and always willing to jump in the ocean, play ball, or read a story.

Greg Robinson was a scrapper, never one to back down from a challenge. He was fiercely loyal to those he loved. He tried to treat those around him, no matter who they were, with dignity and respect. He enjoyed music, food, the ocean, and the Los Angeles Dodgers. He will be greatly missed. Greg was predeceased by his parents, Mark and Rita, and sisters, Julie, Rita, and Kyle. He is survived by his wife, Laura; son, Dominic (Jonnell); his daughters, Lindsay Kupper (Jeff) and Leslie Mathewson (Chris); his grandchildren (Ila, Owen, Ruby Wayne, Barrett, Jennings, Frances); and siblings (Mark, Sandra, Corky, and Jeoff).

A funeral Mass and burial will take place in Los Angeles, California (TBD). In lieu of flowers, the family is asking for donations to two of his favorite causes, where donations can be made online or to the following addresses:

To send flowers to the family or plant a tree in memory of Greg Robinson, please visit Tribute Store
Saturday
15
January

Share Your Memory of
Greg
Upload Your Memory View All Memories
Be the first to upload a memory!
Share A Memory
Send Flowers
Plant a Tree