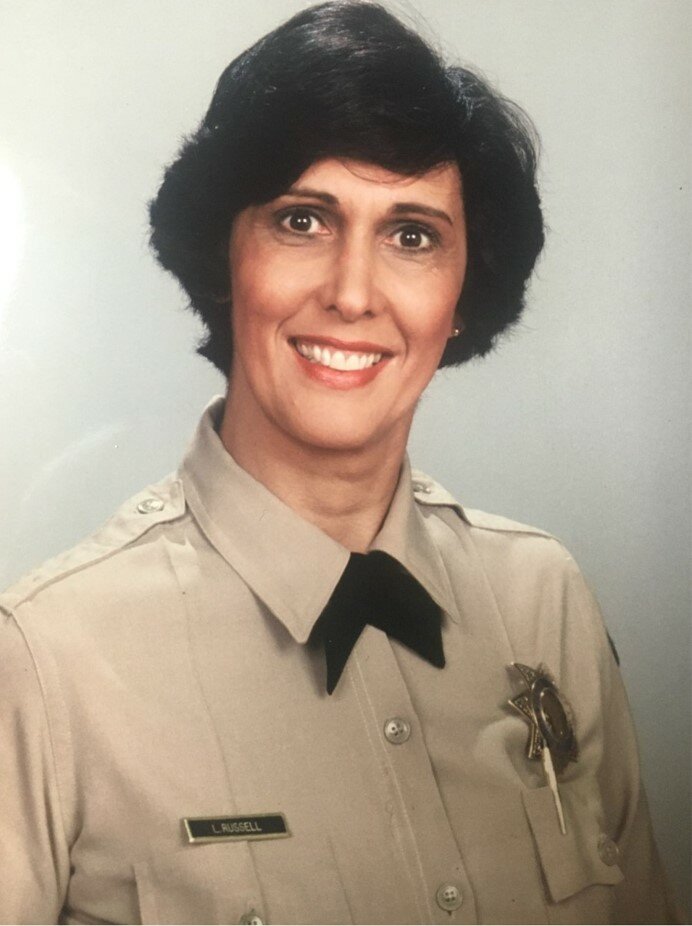 Louise was born on October 21, 1934 in New Bedford, MA. She was one of eight children born to Joseph and Louise De Simas. She graduated from New Bedford High School in 1952. She then traveled with her brother Walter to San Diego, CA to attend college.

There she met and married Lewis Lively, and they moved to Santa Barbara, where she attended UCSB. That union was blessed with two daughters, Lisa and Denise. She later married Bob L. Russell, and had three more children, Randall, Annette, and Matthew.

While raising 5 children, she earned her Bachelor’s degree in Behavioral Science.

Among her innumerable accomplishments, Louise was a pioneer of women’s rights. After working several years for General Telephone, she found her way into law enforcement. She worked for many years as a matron-clerk before becoming the first female deputy sheriff in Santa Barbara County. Louise served and protected her community during the 1970 Isla Vista Riots as the only woman on the riot squad. She later worked as the first female bailiff in the Superior court of Santa Barbara. She was honored to attend the FBI National Academy under the recommendation of Sheriff John Carpenter. Louise retired from Santa Barbara County in 1987.

As a child of Portuguese immigrants, she was proud of her heritage. Louise was passionate about bettering herself.  She was cultured and well traveled, having visited numerous European, Asian, South American, and African countries independently, with family, and with her longtime companion and sweetheart, Olaf Boedtker. She taught herself Spanish through immersion. She was always reading novels, the morning newspaper, listening to NPR and watching the evening news. She was a master gardener and bridge player. She loved her birds. She cared for finches, canaries, chickens, and had somehow trained wild bluejays to eat peanuts out of her hand, which while not uncommon was the purest form of magic in the eyes of her grandchildren. She cultivated flowers and fruit trees, and made the world’s strongest cup of coffee. Louise loved to cook, and was the queen of comfort food.

She was unfathomably brave. She had a competitive spirit, and was driven beyond compare. She was no nonsense except when the dominos were out, then all the rules went out the window.  She had a boisterous laugh and an East-coast sense of humor that were heard most often when she was surrounded by her children.

Louise was an active participant and volunteer in her community. She served on the Board of Directors of the Santa Barbara Woman’s Club. She volunteered for Meals on Wheels for over 10 years. She supported the Sierra Club, Rescue Mission, Lung Association, Heart Association, and Cancer Society, as well as several Veteran groups.

Beyond her impressive resume, she was a beloved mother, grandmother, aunt, sister and friend.

Her children Denise, Randall (Karen), Annette, and Matthew survive her, as well as her brother Raymond, her 5 grandchildren, 5 great-grandchildren, 1 great-great grandchild, numerous nieces and nephews, and her significant other, Olaf.

In heaven she will be greeted by her daughter Lisa, her parents, and her other siblings.

An informal gathering to celebrate Louise’s incredible life will be held on Saturday, February 5th at the Rockwood Woman’s Club beginning at 1:30 PM. In lieu of flowers, donations can be made to Meals on Wheels or the Santa Barbara Woman’s Club in her name.

In lieu of flowers, donations can be made to Meals on Wheels or the Santa Barbara Woman’s Club in her name.

To send flowers to the family or plant a tree in memory of Louise Russell, please visit Tribute Store
Saturday
5
February

Share Your Memory of
Louise
Upload Your Memory View All Memories
Be the first to upload a memory!
Share A Memory
Send Flowers
Plant a Tree