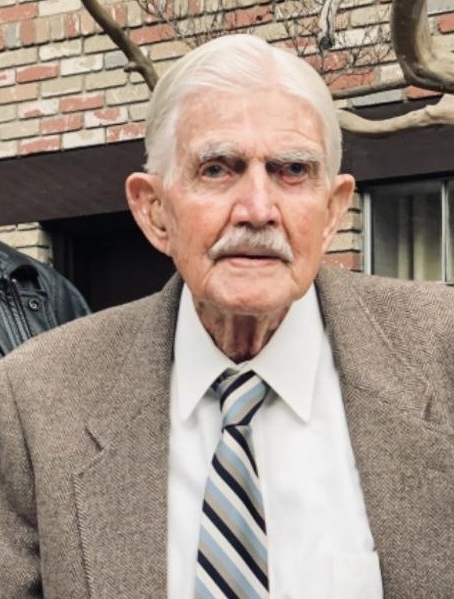 Henry Lorenzo Smith – SANTA YNEZ VALLEY – A hometown hero and, the standard by which we measure other men. Henry was born on May 05, 1926 and passed away on August 12, 2022 at his home.

An avid meatatarian (well-done only), Henry claimed to conserve veggies for those who would actually eat them. He was a historophile with an ongoing fascination of American and natural history, and traveled the country visiting state parks, monuments, war memorials, battlefields, and the largest ball of twine in Cawker City, Kansas. Henry traveled extensively and only stayed in the finest quality AAA-rated campgrounds. He always spent the extra money to upgrade to a water view for his tent. Many years later he purchased a used pop-up camper to travel in comfort. Eventually, he became part of the “RV elite” and finished his travels in style.

A great spinner of yarns, Henry loved to tell stories. Most of them were true. Henry was also great at putting out fires, deep-frying Rocky Mountain oysters, flipping pancakes, caring for innumerable animals, making everyone feel important, and belting out a jaunty tune. He was not one to laze in front of the “boob tube” and was always busy with something. George Washington, Abraham Lincoln, Thomas Jefferson, General Robert E. Lee, and Sitting Bull were his real-life heroes. He became a hero to his son, daughter, stepchildren, grandchildren, and great-grandchildren.

Henry was the youngest of 10 children who grew up laboring on West coast farms in Washington, Oregon, and California. When the U.S. entered WWII, Henry was only 15, and too thin to bogart his way into the armed forces, so he joined 4-H, a potent force in unifying farm efforts in support of the war, eventually enlisting and serving in the U.S Navy from 1950 to 1954. He took pride in his service during the Korean conflict and was assigned as a port side gunner on the landing crafts. During his term of service, he earned the National Defense Service Medal, the Korean Service Medal, the United Nations Service Medal, and the Good Conduct Medal. After four years of service, he realized he didn’t much enjoy being bossed around and cleared out with an honorable discharge in 1954.

He suffered as a bachelor until he met his future bride, Viola Podsadecki, in 1956 and they soon married in 1959. Maintaining that the closer one is to nature the further they are from idiots, Henry entered the U.S. Forest Service protecting national forests and grasslands. After 30 years, he suddenly realized that running AWAY from burning forests made more sense than running TOWARD them. He promptly retired and he and Vi moved their family from Little Tujunga to Santa Ynez. In retirement, the world's longest coffee break, Henry filled his time as a proud member of the Benevolent and Protective Order of Elks, and with no training, started a job as a groundskeeper (aka custodian) at Santa Ynez Valley Union High School, just picking it up as he went along.

Henry is now reunited with his loving wife, Viola Podsadecki (d.1980); son Henry Lee Smith (d.2022); stepson Walter Polek (d.1975), stepdaughters Beverly Rowe (d.2008) and Esther Wild (d.2003); and his grandson, Jason Wild (d.2022). When Henry departed for the big group camping trip in the sky, he left behind and will be greatly missed by his daughter, Juanita Smith and her partner Tracee; stepson, Arthur Polek and his wife Katy; five delightful grandchildren; and eight great-grandchildren.

In lieu of flowers, the family asks that any gifts in his honor be made to the Elks lodge where Henry belonged for 40 years as a charter member, Exalted Ruler in 1987 and 1997, Chaplain, Officer of the Year, Elk of the Year, Wagonmaster of the Wagonairs, and Purple Pig Chairman.

Donations can be sent to:

To send flowers to the family or plant a tree in memory of Henry Smith, please visit Tribute Store

Share Your Memory of
Henry
Upload Your Memory View All Memories
Be the first to upload a memory!
Share A Memory
Send Flowers
Plant a Tree