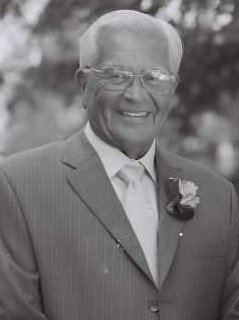 Garrett Michael Van Wyk, 85, passed away of natural causes on April 24th, 2021, at his home in Santa Barbara, California.

Magnanimity, or greatness of soul, reflects well the 85 larger-than-life years Garrett Michael Van Wyk graced this earth. Born August 4th, 1935 in Bismarck, North Dakota, Garry would soon be hurling fastballs at Roger Maris in Fargo with the American Legion, pushing the aerobatic limits of the T-28 Trojan in Naval flight training over the Florida coast, and assembling the Pacific fleet at sea from inside the USS Hancock. His eyes would sometimes glisten as he’d describe the reward for his all-night navigational work: witnessing the convergence of the planet’s greatest nuclear task force, the US Pacific fleet, silhouetted against the morning dawn. “The call-sign was ‘Rampage’.” he would recall, “I loved our call-sign.”

After his Norman Rockwell upbringing in Bismarck, North Dakota, Garry moved to California and attended UCLA on an NROTC scholarship. During Naval service he married his college sweetheart, JoAnn Rusconi, settled in Santa Barbara and took over his father’s Volkswagen/Porsche dealership with his sister Greta and brother Loren. He later expanded the franchises to include Santa Barbara Mazda, Peugeot, Renault, Van Wyk’s Body Shop, and a used car dealership. Meanwhile, with JoAnn he expanded the Van Wyk family, first with Julie, followed by Chris, Paul, Lisa, Steve, Greg, and Mary.

Garry was magnanimous in sharing his passions of sailing, flying and travel with family and friends alike. With great effort he taught his children the basics of sailing with the “Sea Shells” using Mahogany boats in the Santa Barbara channel. Other times he’d awaken a lucky son, daughter, or friend for an early morning aerobatic adventure. As an EAA member, he sponsored or helped build numerous home-built airplanes and was an avid model airplane builder as well. Garry’s WESTPAC tour sparked his love for world travel, and introduced him to his beloved island of Maui, where he often brought his family for special memories and cherished sunbathing time. When at home, Garry would regularly reconnoiter with the “Old Vultures”, a small group of singularly impressive pilots; cut from the cloth of the greatest generation, to tour car/airplane museums or just share stories and a meal in downtown Santa Barbara.

More importantly, Garry was a larger-than-life citizen and father. He had medical superpowers, capable of maintaining a steady diet of Baskin Robbin’s Mocha Blasts, chocolate chip cookie dough, and a complete absence of vegetables, yet still enjoyed near-perfect health. He would order hamburgers over the car dealership PA system at 630 Chapala to the adjacent “Ernie’s” across the street. Garry was named Santa Barbara Father of the Year, Businessman of the Year, and received the FAA’s “Master Pilot” award. He was once ‘caught’ on KEYT hidden camera, where he, in keeping with his character, made a heroic effort to return a cash filled wallet to its rightful owner when he thought no one was watching. Garry’s bigheartedness was consistent and often anonymous. Not only did he donate cars at his cost to worthy causes, at times he just footed the entire bill. He doted on his thirteen grandchildren, and seemed to enjoy the toys he gave them as much as the grandchildren themselves. In the evenings he opened up his car-dealership to Christian youth group meetings, and in his 50+ years as a Father he never missed a Sunday Mass.

Businessman, benefactor, aviator, sailor, friend, brother, father and husband, Garry would want to be remembered above all as a child of God. In his last days he was surrounded by his wife, children, and grandchildren, who miss him and pray for him. With heavy hearts, we bid a great man a fond farewell.

Visitation hours will be held from 3 to 5PM on Tuesday, May 11th at McDermott Crockett Funeral Home. Private family funeral services will follow. Friends of Garry are invited to Calvary Cemetery Wednesday, May 12th at 11:30 for the interment. In lieu of flowers, contributions in his memory can be made to VNA Health, Saint Raphael’s Church, or San Roque Church.

To send flowers to the family or plant a tree in memory of Garrett Van Wyk, please visit Tribute Store
Tuesday
11
May

Share Your Memory of
Garrett
Upload Your Memory View All Memories
Be the first to upload a memory!
Share A Memory
Send Flowers
Plant a Tree