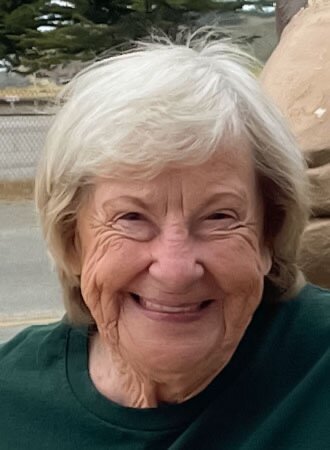 Audrey May Pinkham of Carpinteria California passed away peacefully in her home on August 11, 2021.  She was born August 23, 1935 in Subiaco, Australia.

Audrey spent her early years growing up in Perth Australia.  She moved to the United States in her teenage years and graduated from East High School in Salt Lake City Utah.  She then went to the University of Utah as a math major for a year. After marriage she eventually ended up in Simi Valley California where she raised her 2 children.  She went to work in the aerospace industry rising through the ranks until she finished school and got her degree in Business Administration at California Lutheran University and became a business analyst.   She was known for her very strong work ethic and also for her laughter and humor.    Audrey loved her family.  She loved walking and did many breast cancer walks to raise money for breast cancer research.   She loved living in California and being near the ocean.  Audrey had many friends. She was generous with her time and resources.  She will be sorely missed by all who knew her.

She is preceded in death by her parents Walter and Miriam Neal, brothers Walter Douglas Neal and Kenneth Neal, her sister Thelma Norton, grandson Eric Nelson, and husbands Bill Schulze and Don Pinkham.  She is survived by her sister Doreen Nelson, children David Nelson (Liz), Gloria Garnet (Tory), and stepsons Billy Schulze and Tim Schulze (Nancy), as well as 10 grandchildren and 16 great grandchildren.

To send flowers to the family or plant a tree in memory of Audrey Pinkham, please visit Tribute Store
Saturday
21
August

Share Your Memory of
Audrey
Upload Your Memory View All Memories
Be the first to upload a memory!
Share A Memory
Send Flowers
Plant a Tree